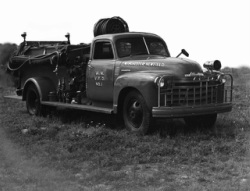 While war clouds gathered over Europe in the 1930’s, plans for a fire company in Winchester Center began to materialize. The travel time from Winsted or Torrington often exceeded a half hour, especially in bad weather.  Gallant firemen from the Winsted fire companies typically found nothing but glowing embers upon their arrival at a fire scene up here in the hills. Despite the community’s best intentions, World War II sapped the human and financial resources required to initiate a new fire department in the Center.

The nation took on a new life after the war, and the Old Society was no exception. Long time residents like Phil, Larry, and Elmer Hurlbut, their father Lester, Wallace Pendleton, Francis Goodenough, and others saw the opportunity and they took it. They organized a public meeting to discuss formation of a new fire company, and the community responded in spades. Over 100 attendees gathered at the Winchester Grange to discuss the possibilities. The Department formally organized in April of 1948 with significant help and sponsorship from the Grange. Sixty members from Winchester Center and the Newfield section of Torrington joined the force. A strong-willed ladies’ auxiliary formed at the same time to provide financial and moral support. Larry Hurlbut was voted in as Chief at the organizational meeting (Larry recently completed his 61st year in that post and he shows no sign of making any concessions to Father Time).

The fledgling department bought a late 40’s Chevrolet flatbed and rigged it with an army surplus pump powered by a Chrysler engine. They mounted the engine and pump along with a 500-gallon water tank on the bed of the truck. Chief Hurlbut fondly recalls driving the truck to many calls with brothers Phil and Elmer on the back, starting the pump engine and preparing for the task at hand. The Department purchased rainwear and boots from the Toplitz men’s store on Main Street in Winsted and they ordered their first helmets from Boston.

Without question, the early days demanded frugal and pragmatic management, a culture that remains with us today. The membership cobbled together every tool, hose, and piece of advice that they could muster at the least possible cost (or less). The boys pitched in to build a one-bay firehouse appended to our gracious host, the Winchester Grange. As we do now, the Department drilled regularly, and they trained closely with firemen in Winsted. Emergency calls would ring simultaneously at Chief Hurlbut’s house and at the answering service of Ralph Goodenough, who lived across the street and south a bit from the fire house. From there, the auxiliary took over with a phone tree method of notification. A very loud siren mounted on the fire-house roof alerted those within earshot. In due time, the Department acquired its first radio, a rather large instrument with 10-pound batteries.

In the early 1950’s, lightning, bad wiring, or both, sent the old Grange Hall into its cellar. According to Chief Hurlbut, we would have lost the truck too, if it were not for the quick thinking of next-door neighbor and member Clyde Bayette, who saw the flames and ran out in his skivvies to save the old girl. Like many small towns under similar circumstances, the community rallied, and they rebuilt the Grange and firehouse in short order.

As the 1950’s came to a close, the need for a second truck became evident. We located a 1951 Mack fire truck for sale in Ravena, NY. The old Mack was in pretty rough shape, after suffering through a fire-house blaze in Ravena. The Department parked Old No. 2 in the Prospect Street fire house and fixed her up with much hard work, while the Grange allowed us to build a second fire-house bay. The Mack came on line in 1961, and quickly became our workhorse.

Fortunately for us, the State opened a regional fire training school in the early 1960’s located just down the road in Burrville. Dozens of Winchester firefighters trained at the fire school over the decades, and Chief Hurlbut served as director of that fine facility for many years. In the early years, basic schooling involved 40 hours of pragmatic training in the art of fire fighting. Like just about everything else these days, modern training is more complex and involved. Present-day recruits experience about 140 hours of fire school over a full semester, covering firefighting, rescue, vehicle extrication, first aid, and other important topics.

Sadly, through the 1960’s, the old Chevy grew a bit tired, and the quest began to replace her with a newer, more functional truck. The Department embarked on a five-year fund raising campaign during the late 1960’s. In 1971, we purchased a brand-new fire truck, a beautiful Mack diesel pumper for $37,000. Engine 3 became our primary attack piece. She still performs without parallel, especially following our $ 35,000 investment in her renovation several years ago. We hope to have her around for another three decades.

Throughout the 1980’s, the department yearned for newer, more spacious quarters. The old two-bay fire house was cramped and outdated. We formed a building committee and explored several sites for a new fire house. Finally, we settled on building a new facility on the Grange property and the Grange obliged us once again with their wonderful community spirit and hospitality. As a small private corporation with limited resources, we could not come close to affording the new fire house on our own.

In 1990 the Town of Winchester realized that helping our effort would cost a whole lot less than building and manning a municipal facility in the Center. Our department signed a 20-year contract with the Town to provide mutual aid to Winsted. We parlayed the proceeds from this arrangement into a mortgage that allowed us to construct the fire house in 1991. With much sweat equity from the membership and creative negotiations with contractors, we managed to complete the project for $250,000, at least 30% below the prevailing market value of the day.

The new four-bay house allowed us to add two new trucks. We rescued Winsted’s old Engine 5 from mothballs.  She was pretty-well whipped when we got her. At the same time, we purchased a tired 1973 Ford water tanker from the Colebrook Fire Department. Ron and Pete Marchand, our talented mechanics, put both trucks in fine shape for less than $10,000, just as the new fire house opened. The ’73 Tanker (affectionately referred to as “The Turtle”) served us well for a solid decade.  In 2001 the time had come for a new machine and we purchased a used 1989 Kenworth cab and chassis in excellent condition. Through the skillful grantsmanship of member Todd Parsons, we secured a $12,000 grant toward this $72,000 project from the USDA. We shortened the truck frame and equipped it with a brand new 3,000 gallon stainless steel tank, portable pump, and a 2,500-gallon portable pond. This fine truck will provide water on wheels to fire scenes in Winchester and surrounding communities for decades to come.

In 2006, we purchased a Kubota RTV off road utility vehicle with Homeland Security funds. We equipped the RTV with brush-fire equipment and an off road rescue unit purchased for us by the Winsted Area Ambulance Association. We utilize this piece to fight brush fires and for remote, off-road rescues. In April of 2009, we decommissioned and sold our old Mack - Engine 2. To replace the old stalwart, we acquired our new pride and joy, a 2009 International / Rosenbauer four-wheel drive pumper, and christened her as Engine 4. A federal Fire Act grant of $175,000 and $ 75,000 of our own funds covered the cost. For an additional $15,000, we equipped the new Engine 4 with hose and other necessary gear that meets current standards. Engine 4 has a five-person cab and a foam induction system to enhance firefighting capabilities.

Today, through the extreme generosity of our community and wonderful annual support from the Town of Winchester, we enjoy the use of very sophisticated and dependable equipment, including radio paging devices, portable carbon monoxide detectors, thermal imaging cameras, self-contained breathing apparatuses, and high-quality turnout gear. Of course, we still use much of the eclectic equipment collected over the decades by our hardscrabble predecessors (the elders do not part with much). We respond to several dozen emergencies each year, in Winchester, Winsted, and surrounding communities. Our work load includes responses to structure, chimney, and brush fires, downed power lines, carbon monoxide alarms, serious motor vehicle accidents, hazardous materials incidents, searches for missing people, and a wide assortment of community service activities. We maintain a small, but dedicated roster of people, all with extensive training in firefighting, vehicle extrication, search and rescue, and hazardous materials responses.

On May 8, 2013 a 2012 Ford/Spartan Quick Attack Mini-Pumper was placed into service to replace the outdated Brush 1. It is equipped with a 1000 GPM pump, 300 gallons of water and 20 gallons of Class A foam. It is also equipped with a 9500 LB. rescue winch and is fitted with a complete towing package to transport the department's Kubota RTV off road vehicle and trailer. This truck was purchased using a combination of Grant funds, a USDA loan and Fire Department funds at a cost of approximately $216,000 including all allied equipment.

We face the daunting task of maintaining and periodically replacing our valuable assets. We expect to work hard at delivering these improvements to our community and will continue to rely on the generous support of our neighbors to fulfill our plans. All of our members enjoy the work we do on behalf of our community despite the highs and lows, long hours away from home, and heavy lifting that comes with the territory. We encourage anyone interested in joining to contact one of the members. We can always find room for new firefighters or anyone willing to help out with the difficult algebra of running the Department.